Mitsuki Hayase (速瀬 水月 Hayase Mitsuki) is friends with Takayuki Narumi and Haruka Suzumiya who is shown as a tragic character who is often left alone and depressed throughout the series.

Mitsuki befriended Takayuki Narumi and Shinji Taira in order for Haruka Suzumiya to get closer to Takayuki. Soon though, she forgot that goal and she started having fun with her new friends where she was secretly in love with Takayuki, but she hid her feelings for a long time. Mitsuki was a catalyst for Haruka's accident, because she held Takayuki up by asking him to buy her a ring for her birthday, while he was running late to his meeting with Haruka. While he was buying the ring, Haruka was involved in an accident and fell in a coma.

For the next year, she continued to visit Haruka in the hospital regularly and she was also going to Takayuki's house to take care of him, since he was still in a shock condition from Haruka's accident. Additionally, she was admired by Akane Suzumiya and was often asked for advice from her. Akane hands a videotape of her participating in a swimming race, asking her for tips on how to improve her efficiency during races.

With Takayuki still having not recovered from his shock, she attempts multiple times to make him happier and restore him to his old self. After Takayuki tries to take Haruka outside of the hospital, she offered herself sexually to him in order to replace Haruka in his heart, and they started an intimate relationship.

After they made love for the first time, Mitsuki goes to get a new haircut in order to get rid of the part of herself that she hated. A bit later, Akane, worried because Takayuki didn't visit Haruka that day, pays him a visit, only to find a naked Mitsuki in his bed. From this moment and on, Akane, feeling betrayed by Mitsuki, stopped to communicate with the couple.

In highschool, Mitsuki was a competitive swimmer, but after Haruka's accident, she started to lose concentration and as a result she quitted swimming to care for Takayuki. She also picked up a full-time job at the Hanezawa Trading company, working under Azusa Ishida, after graduation to help Takayuki pay the rent.

After a lot of conversations, Mitsuki and Takayuki finally decided to live together for a while, and at the beginning of the series, before Haruka woke up, they are seen looking to rent a bigger place to live together. One night, as they were walking, they accidentaly met with Akane, who left in a hurry telling Takayuki that she had to "hurry if she wanted to make it within the visiting hours", thus reminding them of Haruka's condition.

While having a dinner in the next days, they receive a phone call from Akane, who infroms the couple that Haruka has awoken.

The next day, both Mitsuki and Takayuki go to visit her in the hospital, with Mistuki encouraging Takayuki to approach Haruka and talk to her. After their visit is over, Mitsuki is confronted by Akane outside the hospital, getting called intimate by her and shouted at. Akane blames Mitsuki for not respecting Haruka's feelings and betraying her by dating Takayuki.

As the series progresses, Takayuki continues to visit Haruka at the hospital in a daily basis, which made Mitsuki jealous and insecure. After a party made by her company, she got drunk and confessed to Takayuki her concerns about him still having emotions for Haruka. After that incident, she decided to pay Haruka a visit. It was during that visit that she realized Takayuki was still in love with Haruka. She returned to Takayuki and made love to him, asking him never to see Haruka again. This led to a big fight between them, ending in Mitsuki slapping Takayuki and him promising not to go to Haruka again.

In Episode 10, as she was returning home, she met with some competitors from the days she was participating in swimming days. She got drunk and they almost took advantage of her where of them tried to lead her to a hotel, but they got confronted by Shinji and she was saved. Drunk as she was though, she slept with him instead. This adds more drama to the series, as it involves Shinji in Takayuki and Haruka's relationship.

Returning home, she found Takayuki on the floor with a high fever. She took care of him and she eventually accepted that she can no longer replace Haruka in Takayuki's heart and she told him that they must break-up, takes off the ring that Takayuki bought her, leaves his apartment and quits her job.

After a few days, she finally decided to pay Haruka a visit and explain to her what happened between her and Takayuki during the time Haruka was in a coma and the fact that they broke up. Shocked and betrayed, Haruka slaps her and Mitsuki runs away.

In the final episode, she walked to the hilltop in which her and her friends used to hang out and she met Takayuki, who decided to be with her. She tried to run away, but he tells her that he loves her and she is not simply Haruka's replacement anymore, since he said goodbye to Haruka. They embrace and resume their relationship. In the final scene, she is shown crying tears of joy over Akane's accomplishment in her swimming competition. She presumably met Haruka on the hilltop with the rest of their gang in the closing scene. 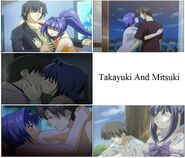 Mitsuki and Takayuki Narumi
Add a photo to this gallery
Retrieved from "https://kimiganozomueien.fandom.com/wiki/Mitsuki_Hayase?oldid=4149"
Community content is available under CC-BY-SA unless otherwise noted.